This trail was severely damaged as a result of Tropical Storm Irene in 2011. It was partially rerouted and extensively rebuilt by the White Mountain National Forest, including the installation of a new bridge across the Mad River, which replaces the washed out Knight’s Bridge. It was reopened in late 2014. Both ends of the trail remain in their original locations, but a portion in the middle of the trail follows a new route, designed to minimize the possibility of damage in future storms.

This is an EASY trail used primarily to access several other hiking trails and upper Greeley Pond [2200 ft.], the source of the Mad River.

The trail begins off of the Livermore Road about 10 minutes from the Depot parking lot. It starts as an old logging road cobbled with small rocks, comes alongside the Mad River [20 minutes], on the right, and continues parallel with the river past the Goodrich Rock Trail on the left [30 min.]. Shortly after this, the new routing takes it uphill on the grade of what was formerly the Timber Camp Trail. The Timber Camp Trail diverges from the Greeley Ponds trail on the left after you have ascended. The Greeley Ponds trail continues, and descends back down to the level of the Mad River, which it crosses on a new bridge.

For the rest of the distance to the ponds, the trail stays close to the diminishing river as it ascends the Mad River Notch. There are 6 wooden planked footbridges over rills and run-offs adding to the river; and then the trail descends some log steps and crosses the river [difficult in high water], at a point where a X-C ski trail continues straight ahead [blazed blue]. The hiking trail enters the Greeley Ponds Scenic Area on the other side of the river, and is wet in several places as it passes to the left of the lower pond. Stay left as the trail forks and begins to ascend gradually to the upper pond. At the north end of the upper pond a spur path on the right leads down to a small beach. The section of the trail from the upper pond down to the Kancamagus Highway crosses several small brooks and descends gradually. It’s often used as an EASY ascent to the beach. 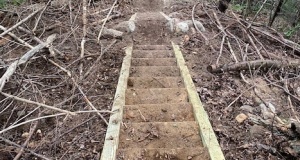 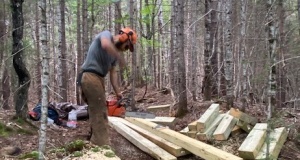