This MODERATE hike meanders in a long elliptical loop along the ridge of Snows Mountain [2600 ft], on a rocky footbed. Despite its modest distance, it’s deceptively strenuous due to variable footing and the many ups and downs of the ridge. There are two lookouts with fine views to the east, and down the Mad River valley.

The trail begins at the Snow’s Mountain Parking lot. About a third of the way up the former alpine ski slope on the right hand side, it turns into the woods. Follow the trail through a conifer woods and eventually out into a mature hardwood forest. Once past the Greeley Ledge Trail on the left, the trail comes close to, but does not intersect with the Snows Mountain X-C ski trail, also on the left. There is also a former mountain bike race route blazed in orange in the woods on the right. Continue straight past both of these and follow the yellow blazes into the woods. The trail wanders up the northern side of the mountain. Once the breezy ridge is attained, it levels off somewhat, and soon a very short spur path for the upper outlook is on the left. Continuing down the trail, the lower lookout is about five minutes away. From this point, the trail descends somewhat steeply at first, but soon joins a logging road grade that takes you down the other side of the ridge. As the hike nears its conclusion, the trail intersects the other end of the former mountain bike route, on an old logging road. Continue straight through the intersection, and soon, after a small brook crossing, the trail finishes in a private driveway. From there, one can turn right and walk up the road, which soon terminates at the edge of the former alpine ski slope on which you began; or, walk down the road to the tennis courts, and cut through them over to the parking lot, which is an easier, but longer route. 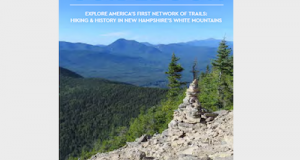 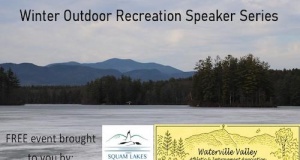